PGA of Italy Professional, Federico Elli, got another PGAs of Europe win under his belt after three successive three-under rounds earned him the 9th BlackSeaRama VIVACOM Pro-Am title in Bulgaria.
Starting the final round with a two-shot lead, Elli played yet more solid and steady golf in windy conditions for a 69 and a nine-under par (206) total.
“It’s been a great day – I had good ball-striking but didn’t putt well,” said Elli. “But then three birdies on the last three holes really helped me out, especially on 18 as it’s a monster hole.
“I made a swing change last year and I worked a lot and it’s starting to pay off…so I would like to thank my teacher, Andrea Corbellini, who helped me a lot.”
With the low score of the day, the PGA of France’s Julien Gressier rose up the leaderboard to finish in second place. Over his closing holes, the Frenchman went birdie-eagle-birdie for a five-under 67 and a total of 212 (-3).

The PGA of Spain’s Peter Gustafsson started the day in second but moved back to finish in third after an uncharacteristic two-over 74 gave him a total of 213 (-2).

However, Gustafsson and his team of Krasimir Balakov, Lubomir Tushev and Andon Tushev were able to convert their overnight lead in the Team Pro-Am event. A solid closing 87 points (-15) was enough for a two-point victory with 259 points (-43). The amateur winners received special awards – SAMSUNG tablets, generously supported by VIVACOM.

Adam Sagar (PGA of Spain) and his amateurs Konstantin Belov, Todor Chakov and Dimitar Georgiev, moved back one place into second with their 257-point total (-41). The amateur winners received special awards – putters from JuCad.

During the Final Tournament Day on BlackSeaRama golf course, the professionals had the challenge to win a HOLE-IN-ONE Prize on the signature 18th hole – BMW 320d xDrive, generously supported by M Car Varna. For all the good shots, the grand prize remained unwon. 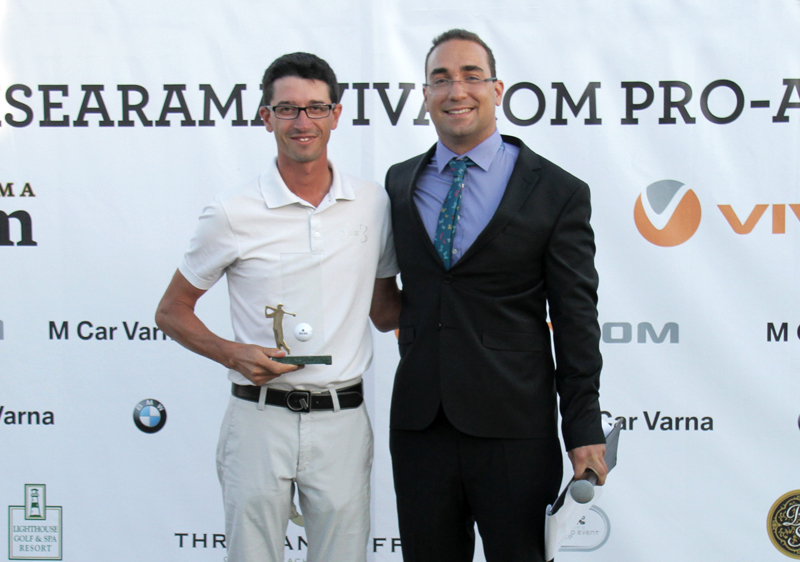