2015 BlackSeaRama Golf Membership is now available 01.11.2014
Annual Golf Membership program is now available until the 1st of April 2015. Do not miss out the Special discount of 10% for early payment by the 1st of February 2015.
BlackSeaRama Golf & Villas thanks all its members joined the club for the year 2014! All of them get additional 5% discount on the 2015 membership fee.
Details ›

Russian Tour 10 started from Cape Kaliakra signature golf coast 24.10.2014
The first stage of the prestigious Russian golf tournament Tour 10 for season 2014/15 was held from the 16th until the 18th of October at Thracian Cliffs a Gary Player signature golf course.
Details › 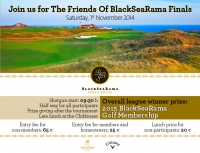 Culinary moments: A Taste of the Alps 01.10.2014
Good food gives a festive touch to summit celebrations and lifts the spirits during the autumn days in BlackSeaRama Golf & Villas. From the 1st until the 31st of October our Clubhouse Bistro will be the Alpine meeting point for good food lovers.
Details ›